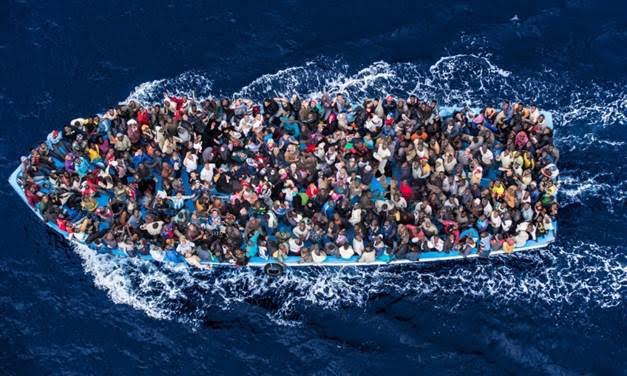 Our team of eight has just returned from a week long outreach in Thessaloniki along the Greek-Macedonian border where some 60,000 refugees are cramped in “tent camps” mostly from war-torn Syria, who have left all behind to flee to the safer shores of Europe.

Our team from Israel, Holland and the UK

We spent our time mostly in “hotspots” on the border mostly in one such camp called Oreocastro, which is currently hosting about 1200 refugees with more arriving every day, just after Europe’s biggest refugee camp at Idomeni was cleared this week by police.Life in a refugee camp…

We mainly focused our efforts on food and medicine distribution and a medical tent that was set up as a makeshift clinic. Many mothers were there with their babies for treatment, diapers, baby milk and advice. We also arranged children’s activates for the hundreds of wandering kids like games, dancing, football and arts and crafts. There were many opportunities to share the love of Christ through serving our mostly Muslim friends, and there were many discussions! We also coordinated our efforts with other organizations that were there like YWAM, Samaritans Purse, Caritas and Doctors Without Borders.

Already, nearly a million people have passed through Greece, the vast majority arriving on islands from the nearby Turkish coast. Reportedly hundreds were not so fortunate, having drowned in the sea before making it to Greek shores, sadly some of whom were women and children. How sad that these people must trust their lives with shady human smugglers after their overcrowded, unseaworthy boats that often capsize in the Mediterranean.

I went on this outreach in order to better understand the situation firsthand and develop my own opinion of the crisis rather than being influenced by unbalanced media reports.

My conclusion is that this certainly is a humanitarian crisis of epic proportion as the situation grows more desperate by the day and although I do have concerns that some of the young men I met may have future Islamic and/or political agendas, the human need of suffering people, especially women and children should warrant political intervention and vast humanitarian assistance to these desperate souls immediately.

Should they all be allowed to enter freely into Western Europe? I will let your conscience answer that question for yourself…

Many of the people including young families we serve have just arrived in Israel as new immigrants and they are in need of just the basics necessities for starting life over in their new country. As you listen to the stories below, keep in mind that some are fleeing the rising tide of anti-Semitism and conflict such as in the Ukraine and other threatening areas around the world.

FZS and Holocaust Survivors enjoy Day at the Dead Sea

Dear friends at For Zion’s Sake,

Please accept our heartfelt gratitude for sponsoring a trip to the Dead Sea for the people in our organization of former prisoners of concentration camps and ghettos of World War II. The trip left a lot of nice impressions, as you can see on the pictures. (For Zion’s Sake was able to sponsor the renting of the bus, entrance to the spa and breakfast and lunch at the Crown Plaza for 43 people.)

Still young enough to have fun!

Thank you very much!

Please visit us any time at our center in Jerusalem!

We will also be hosting another group of survivors at Haus Schönegg in Switzerland for 1 week. There is something very special and valuable in meeting people who survived the Holocaust – the last living witnesses of these terrible times! They tell a touching and authentic way they were preserved and want to raise awareness on the newly burgeoning wave of anti-Semitism especially in Europe. Please pray for many fruitful conversations to share the love of Yeshua with them…

Update from the Philippines

Since last week, everything is falling in to place. Last Saturday we collected the medicine for our mission in Tacloban. Thanks to our sponsors and Sir Lito (a distributor of medicine) we could buy most of what we needed at a reasonable price. In addition, we received a donation of juice and cake for our volunteers who would make the long trek into the mountains for an outreach.

So, we had our first mission in Brgy. Cacatmonan. This is a village in the mountains with 122 inhabitants. It takes about 2 hours to get there on foot. With 4 other male volunteers we went on our way. The day before, we trained them, particularly in the medical field. They had to carry our equipment and medicine.

Honestly, I was quite nervous. There were people from Health Hernani who were going to observe us and make a report commissioned by the local government. It would also go to the mayor. In the morning at 3am our team gathered in our office in order to leave for Cacatmonan at 4am. Half an hour hadn’t passed by on the road when we got a flat tire. One and a half hours later than planned, we arrived in the town of Hernani to begin our journey to Cacatmonan. There were two nurses, two midwives and a number of security guards waiting, the mayor didn’t go with us after all.

At first it seemed the climb was even better than expected, but after a while our path became steeper and steeper. We had to really push ourselves up. After every mountain we hoped to see the village, but we just kept walking…

Setting up a medical clinic in the mountains

Soon there was a queue of patients, particularly mothers and children waiting. We only had a small space, so sometimes it was a shriek and a buzz! There were two volunteers for registration, three volunteers measured vital signs and I and two nurses were doing the consultation and handed out medication. The most common problems were malnutrition, asthma and coughs. Especially during the rainy season, many Filipinos suffer because of their lungs.

Below I have added some prayer requests. Would you include these in your prayers?

Warm greetings from the Philippines,

1. Thank you for all the blessings!

2. That the hearts of the Filipino people would open themselves to God’s Word

3. Health and enough medication for patients

4. That our mission on Ando Island may go well along with the EVSU team

5. Strength and wisdom in preparing our mission in Batang

Here are some photos of Chai Let town in Lao country boarder where Juda’s family Bryce Home 15 is there. He is called to serve the Lord to train the youth and children to protect them from drugs and lead them to church. His relatives and society recognize and trust him to lead their children to Christ. We also recognize and that is our goal to encourage to be faithful to His call.

His house is near the river. We handed him some relief fund last year to buy a land and build. He has received the land but not enough funds yet to build. Please pray if he has a good building to care for those people and children around him, they will become his resources.

Pastor Juda and his family

Site of the future church

Also, here are some more photos of New Bethel village church. That is the village where we were not allowed to enter when we had a trip with you in time earthquake took place.

But at this time, the Lord connected us not as our plan but the Lord connected FZS to stand alongside to give them a proper biblical leadership. Counting their leaders as Bryce Homes at the same time taking them to the truth of God’s word is a great privilege for us.

Please pray and if you don’t mind, make a plan to visit one more time.

With thanks in Christ,
Elisha

Please keep praying. Glory to God, I have received several letters from Beslan youth that I will be submitting with the visa application, and work is in progress now in getting the invitation from the grandmother I stayed with while there – one of the brothers in the Baptist fellowship is helping her, and hopefully I’ll have that soon to then submit with the visa application.

They’ve changed their visa structure, and actually now recommend foreigners to apply for a 3-year visa! I’m trying to get a “private” visa, meaning a home-stay, but things have been slow in getting the necessary invitation letter needed to apply. I’m not worried, as I know all is in God’s Hands. But please keep this in prayer – have tried a number of times to phone the grandma I stayed with before, but she to my knowledge has no cell phone, and she often times is out visiting neighbors and sometimes also travels to South Ossetia (where she’s originally from). I asked one of the Christian moms who lives close to her for help in coordinating this, as the grandma (Nazira) will need to write a letter and then get it notarized, but that mom was out of town, and recently returned to Beslan

Lord willing I’m hoping to be in Beslan about mid-July, so if FZS were able to come in August that would be great; September could work great, too.

We just wanted to to give you a rundown on how we spent the donations from FZS so far. The registration of the organization cost us $200 and I used another $120 to Port Loko and we could bless one of our convert who stayed with us at home presently having a lot of challenges with His family. We also could pay lesson fee for one of our brothers In the Lord who have also problem with school. We also spend some for food at home. Thomas also was a blessing to us which we used to invest in agriculture to sustain the ministry in food, and we be a blessing to mission retreat to another ministry which is M.A.F Mission Aid Fellowship. Kenema youth retreat. You also send $300 for passport we spent $200 for it and we settled our home with the rest. the last $100 is still in the account. Trusting God to complete with what we intended to do with the 20 families. we thank you for your prayers and support. Thanks very much from Alphajor and Mariam. Believers In Christ Mission Int.

Thank you for standing with us!