The Beslan school siege started on September 1st, 2004 and lasted for three days, when on the 1st day of school, over 1,100 people (including 777 children) were taken hostage in a gymnasium. The crisis began when a group of armed Islamic terrorists besieged the school in the tiny town of Beslan, in the Southern Caucasus region of Russia. On the third day of the standoff, Russian security forces stormed the building with the use of tanks, incendiary rockets and other heavy weapons. At least 334 hostages were killed, including 186 children, with a significant number of people injured and reported missing.

FZS was there just one week later to provide comfort, prayer, and support for the many devastated families that survived. Our work continues un Beslan until today through the many relationships we have established over the years with bereaved parents and the children who survived and are now grown up. 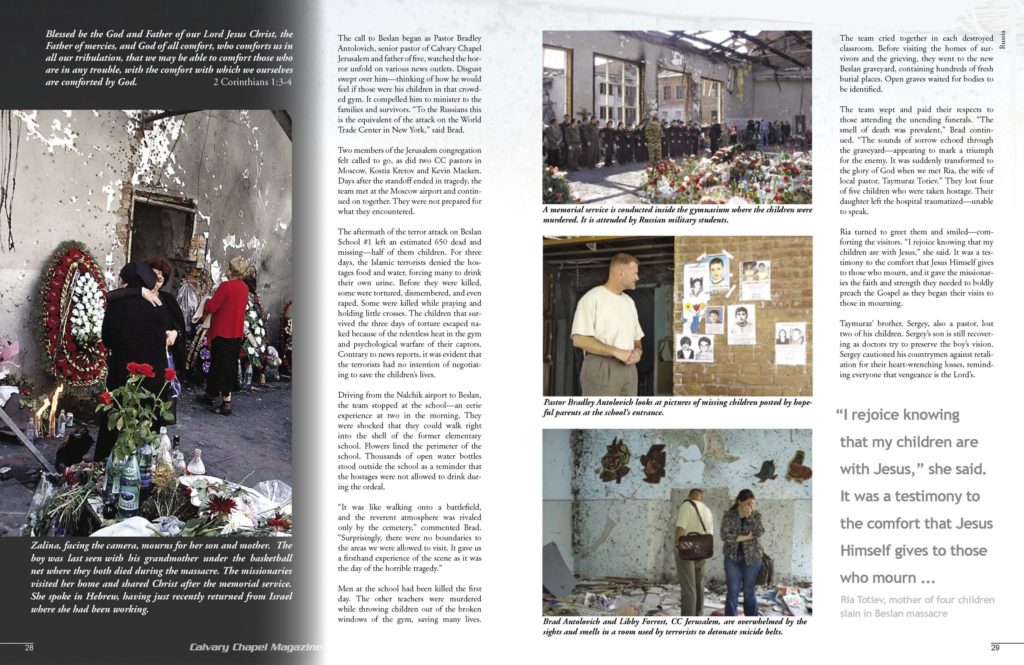 Here is a link highlighting our first outreach there: Comforters From Zion

As soon as our team landed in Vladikavkaz, we were immediately taken to the “City of Angels” Beslan cemetery with Jason Catizone who has been called to serve there for many years. It was here, 12 years earlier another team first came and witnessed personally the carnage of the school massacre at this gravesite. Then, only fresh mounds of dirt covered by weeping mothers and fathers crying over the resting place of their lost children. Today it is a beautiful marbleized memorial to their loved ones who perished that fateful day when…

Our mission this time was to encourage as many victim and survivors’ family members as possible who are still suffering with grief and trauma from the attack. Many survivors already feel forgotten by the world through the passage of time, from that fateful day that forever changed this tiny community.

Two such families that had to endure such unmeasurable hardship are the Totiev brothers and their wives. Both are Baptist pastors in Beslan itself; who together tragically lost 6 of their 11 children. Pastor Taimuraz Totiev and his wife Raya had their five children at school; only the second-eldest daughter, Madina, survived the attack. Pastor Sergey Totiev, also had children at the school. Sergey and his wife Bela buried two of their children on the same day. 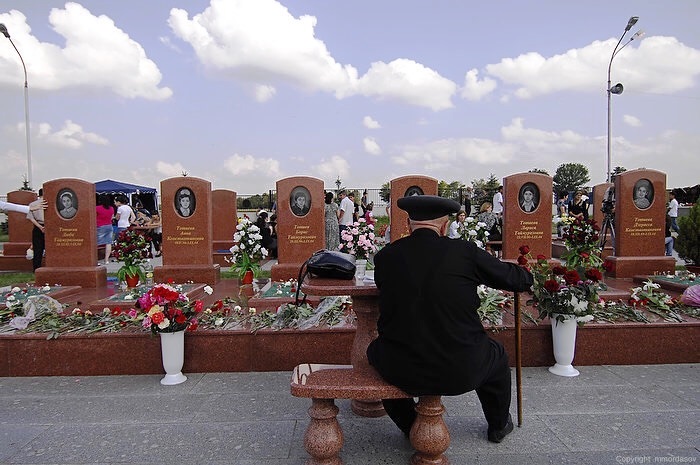 In all my life, I have never met believers who have been called to suffer as much as the Totiev family, especially Raya who had to bury 4 of her children in one day because of terrorism. Remarkably, she was still able to teach Sunday school the following week at the Beslan Baptist Church while Taimuraz taught the message on forgiveness! I, like many others in Beslan, have witnessed their faith to be real and genuine, even after 12 years of the painful loss of 4 of their 5 children, they can still praise the Lord for His goodness and mercy! I have decided to keep the Totiev’s picture on our wall to remind me not to complain about my petty trials and struggles! 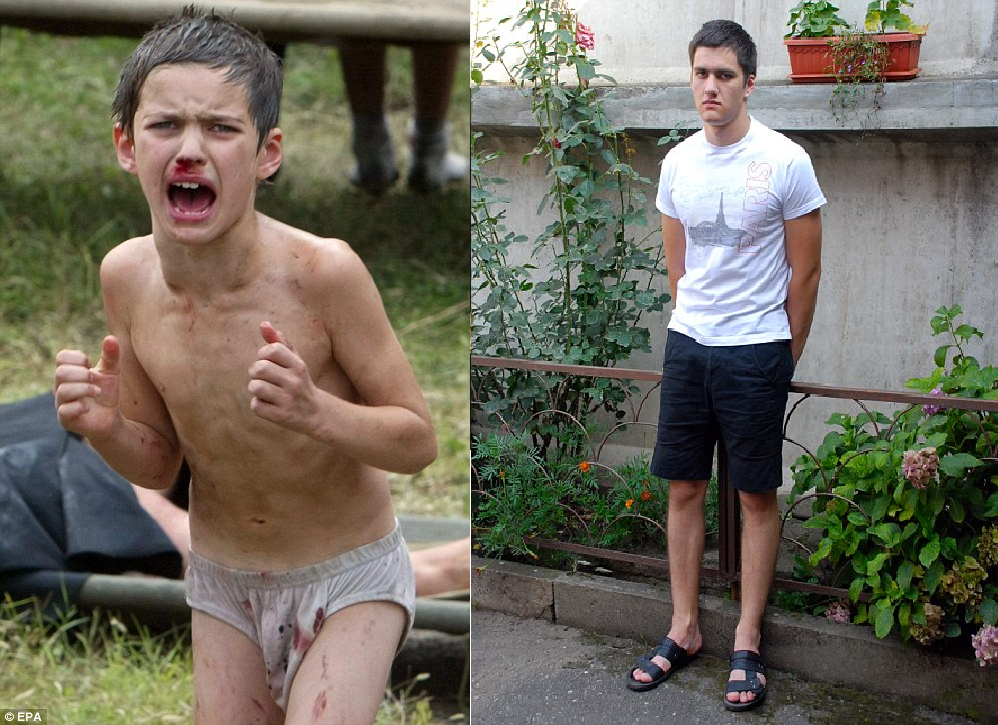 This is Georgy Ilyin, 7 years old at the time. To the right is him at the age of 19. This shocking picture of him running from militants after the destruction of the gym quickly became iconic. Georgy was attending his first day of school when the militants attacked. Although his mother was unable to accompany him to school that day, he was with a group of other relatives, none of whom survived. “It’s important this can never happen again. Now they are investigating this Boeing crash in Ukraine. Will we ever know what caused it? This world is moving to something very bad. … I can’t understand how it happens, because if you ask people, no-one wants a war, so how does it happen? Ten years is nothing for such pain.” Now training as a heart surgeon, Georgy is one of the survivors who journeys to the ruined gym every year on the anniversary of the attack. “I want to pay tribute to my old childhood friends. It is hard for me to go inside the gym but I must do it.” 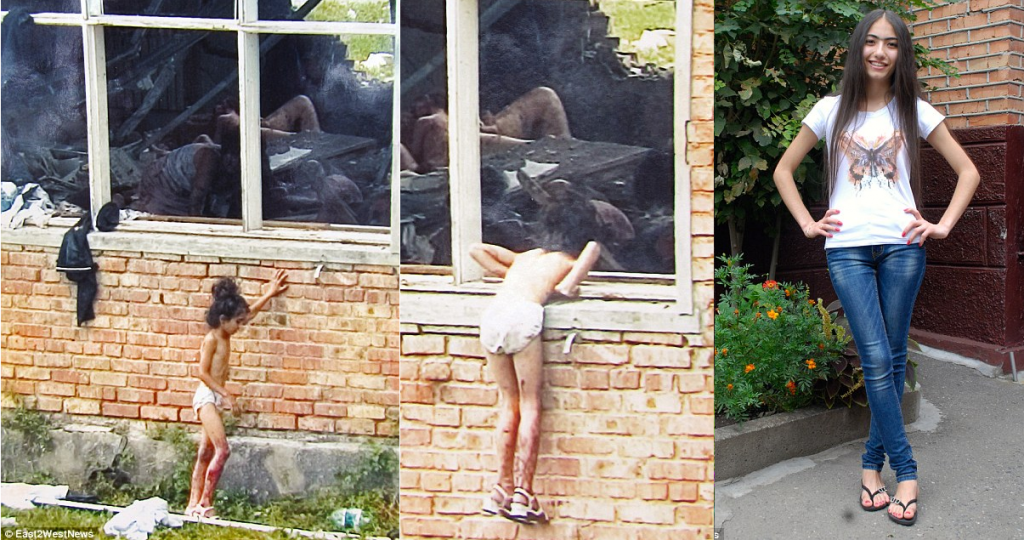 Pictured on the left is 7-year-old Aida Sidakova. After the gym collapsed, she was photographed attempting to actually climb back inside in order to find her mother, who had been with her for the duration of the siege. Her mother survived. On the right is Aida as she is today. Her dream is also to enter the medical profession, as a dentist. Even after multiple surgeries, she still has pieces of shrapnel embedded in her knee, which occasionally give her pain.

Aida too visits the gym every year to pay her respects to the dead. “This tragedy changed my life but it surely did not break it. It happened to me and you can’t change this fact. … My best friend Dzera Gapoeva was killed there. We played together when we were small and dreamed of going to school together.”

Georgi Farniyev, 10 years-old at the time, was pictured seated next to a bomb during the siege. A 3rd-grader, he had no adult relatives there to comfort him during the 3-day ordeal. Georgi dreamed of joining the FSB as an intelligence officer, but the injuries he sustained made this impossible and his application was categorically denied. Instead, at the age of 22, he is training to be a veterinarian.

Of these four individuals, Georgi seems the most mentally affected. He refuses to go to the gym monument with the other survivors. “2005 – the year after – was the first and the last time when I went inside the gym again. I lost consciousness. I would never ever go there again and please don’t ask me to show you where I sat. It is still with me, this is not something I left behind.

I am older now and people used to tell me that children easily cope with bad experience – I must say this is not true. My pain is enormous and I carry it with me every day. I know I would never tell my children about my experience. This is not something children should know about.”

Thank you for your continued prayers as we share His love with the wounded souls in Beslan!