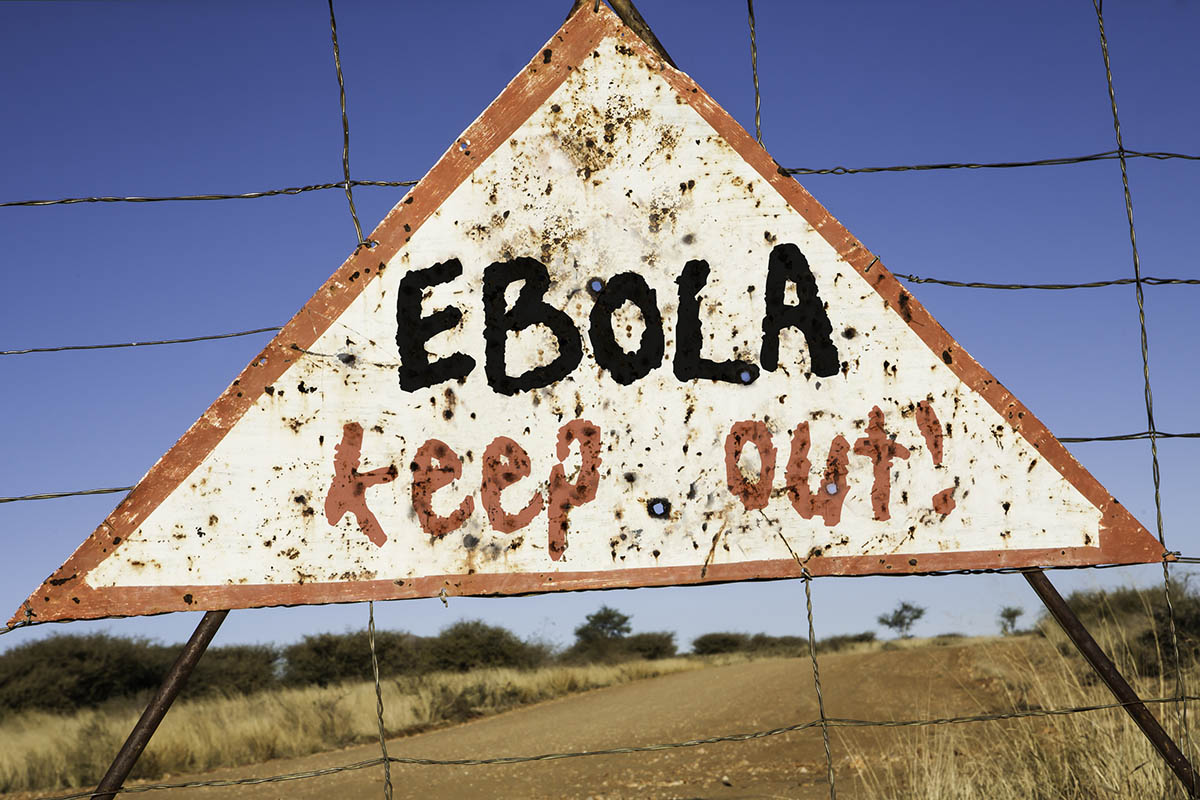 We have just returned from an amazing 17 day outreach in Sierra Leone, W. Africa where we have been ministering the gospel to Ebola survivors along with humanitarian aid after the deadly virus killed more than 11,000 people and left 16,000 victims who survived the plague. Most of the survivors we met were very open and happy to pray and receive Messiah into their heart because they were very thankful just to be alive! Unfortunately, many of the survivors were forced away from their families and villages and made to live in makeshift communities with other survivors like in the leper colonies of olden times. Many Sierra Leoneans are quite superstitious and the stigmatism that the Ebola virus was a voodoo curse and might return again if witchcraft is not practiced keeps them in constant fear. These people truly need to be free in Yeshua!

Perhaps Sierra Leone is best known for its brutal 11-year civil war, finally ending in 2002 after claiming the lives of more than 50,000. The movie Blood Diamond, staring Leonardo DiCaprio as well as Kanye West’s Grammy-winning song “Diamonds from Sierra Leone” are generally how Americans have come to know this tiny, tropical West African nation, slightly smaller than South Carolina and wedged between Guinea and Liberia.

During Sierra Leone’s 11-year civil war, as many as 27,000 people are estimated to have been disabled or lost limbs in brutal amputations by Revolutionary United Front (RUF) rebels.

But there’s much more that links it with the United States. The British first took slaves from Sierra Leone to North America in 1625. The Trans-Atlantic Slave Trade Database has information on almost 36,000 slaving voyages that forcibly embarked over 10 million Africans for transport to the Americas between the sixteenth and nineteenth centuries. The actual number is estimated to have been as high as 12.5 million.

My personal impressions included endless rooster crowing, poor unpaved roads and people carrying heavy items on their heads. The pollution as a result of burning trash and no vehicle emissions regulations make Freetown an asthmatic’s worse nightmare. The heat, power outages and the slow Internet speeds are frustrating. Sierra Leone is a third-world country by just about all standards–it’s the third poorest country in the world–but there are pockets of modernity, usually restaurants and a few scattered hotels catering to the flock of expatriates working for non-governmental organizations (NGOs) and Christian ministries.

A Sierra Leonean woman carrying the store on her head

I am Alphajor Mamadu Bah, a Sierra Leonean, born in Freetown. However, my parents hailed from Guinea which is one of Sierra Leone’s nearest neighbors. I am a Fullah by tribe for which we are known as the strongest practitioners of Islam within the Mano River axis. As a tribe we hold Arabic education to the highest esteem and it’s a must that every child born in a Fullah home acquires Islamic education rather than circular education.

At the age of seven, I was enrolled in an Arabic school concurrently with a circular school which was a Christian school because they were the best schools in the city by then for which my parents had no option but to be enlisted in to that Christian school. Nevertheless, I was regretful and at the same time fortunate as a result of the fact that I started having a glance of who JESUS is, but I was strictly warned not to ever mention the name of Jesus neither to talk about him.

Having spent eight years in Arabic school and later concluded reciting the entire chapters in the Quran, which was a symbol of the greatest achievement in the Islamic society for my family. Things were not working well with my family despite the fact that we practiced Islam but we still dwelled in sin and so many struggles. But we were taught that we could overcome our sinful nature through prayers, fasting and charity. Lunsar, Sierra Leone, Team members ready to take a body in a village

For me, I was in bondage in which lived in absolute alcoholism, immorality and what have you. During this time, I relocated to a friend’s family home, during this period, my friend’s mom (Aunty Princess) a very good Christian upon realizing my struggles, asked me to try Christ within which I became so confused to choose. Upon her intervention, she asked me to join her in a church revival which I did. At a time whiles the pastor was preaching about sin from the Book of Isaiah 59:1-4. I became totally convicted for which I thought my aunty explained my struggles to the pastor. Afterwards, she gave me a Bible which I started reading from revelation on that very night. I continued reading the Bible, in which I got confused about Jesus being God, the son and spirit at the same time. Contrary to the Islamic preaching which says “God is one” I was in a dilemma and one night I prayed to God to lead me to the right path.

Subsequently, I had a dream, in which I saw a man wearing white holding the Quran on his left hand and the Bible on the right hand, upon which he asked me “You are confused about the way to go?” after which he pointed the Bible to me and I woke up the next morning during which I instantly gave my life to Christ “glory to God!!” automatically the urge for alcohol, sexually immorality died through which I experienced peace like never before.

Just after my aunty flew from the country, I was faced with reality of my new faith and my family, where in there was no place to go. I had no alternative but to return home. Even though I returned to my family house, I secretly continued reading the Bible, attending church, and my mother was the first to find out from which she told my father and brothers. I was confronted, upon which I had the utmost boldness to out rightly denounce Islam. As a matter of fact, my elder brother threatened to kill me but that was not enough to waver the faith I have experienced. For the sake of peace, I left for a while.
I was prosecuted by members of my family and tribe men but I remained steadfast, earnestly prayed for them to get salvation as there was no other way. I had a burden to tell people about whom Jesus is, I was introduced to a team of women evangelizing during the Ebola scourge, where I met Mariam during which we became friends.

It was against this backdrop that I later joined Mariam in evangelism in juvenile prison and supported children spiritually, physically and emotionally. Irrespective of the fact that the Ebola was at its highest peak, we continued evangelizing, through the Grace of God, Mr. and Mrs. Elliot in the U.S.A sent some money and we located some of the survivors in which we undertook food distribution amidst a number of challenges one of which was the issue of stigmatization. Through this event, we came together with some survivors and we started Believers in Christ Mission International, in supporting survivors, spiritually and psychosocial support through counseling services.
On the 28th December 2014 after listening to an Ebola survivor’s testimony in church, the lord said “Son this is what I want you to do, identify Ebola survivors and create a link for them to be helped, laying special emphasis on the orphans and widows. In this way the gospel will be preached throughout the world. God spoke vividly about Port Loko which was the most affected area, to start up a children’s Home for vulnerable orphans and widows in distress (James 1:27). After six months of knowing Mariam, God revealed her as my wife, as a result, I proposed to her and she accepted after many confirmations. In this vein, I told my parents whom I was still staying with and after two hours of blasphemy, they clearly told me that the only way they could support me was for me to deny Christ and choose the Quran. I told them, not even marriage will make me deny Christ. God remained faithful and we got married on 7th November, 2015. My last brother was the only one who was present during our wedding.

Finally, by divine connection we met Thomas and Bradley from For Zion’s Sake ministry who came to Sierra Leone just after the Ebola scourge to get firsthand information on how they can be of help. We have been visiting Port Loko and being in close contact with Ebola survivors team in Port Loko and we have identified the most needy and also on the verge of getting a house for ten children and widows who will be caregivers for the first phase.

They have currently supported us financially and morally for which we are most grateful. All glory to God, we trust God for his Grace to see us through this great commission.

God Bless Us all!!
Alphajor Mamadu

Finally, it is both with great sadness and joy unspeakable, I announce the passing of my mother (and Grandmother) Sylvia Carr into His Glory on February 13th. Sylvia was an integral part of our For Zion’s Sake family from the beginning and she participated in love, prayers and support all the way until the Lord took her home… We love you mom and miss you very much!

Thank you for standing with us