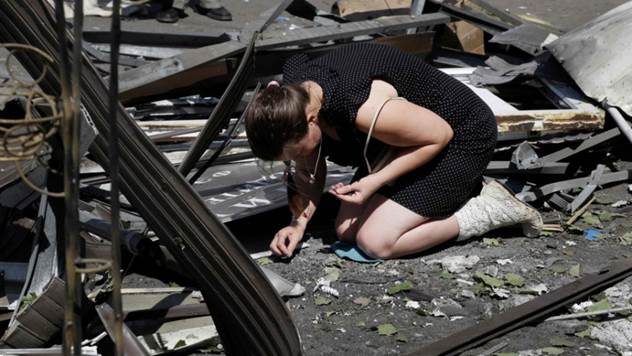 “…I am sending for hunters who will hunt them down in the mountains, hills, and caves says the LORD. (Jer 16:16)

The train station has been bombed. There is little avenue for escape, but in the dark of the night, Jews leave their homes, their possessions — sometimes even their elderly — and make their way to prearranged pick-ups, awaiting safe passage from their battle-scarred cities to refuge.

With less than one week to go before Passover, 110 new Ukrainian immigrants landed in Israel on Tuesday morning. The majority of newcomers are refugees who fled the fighting zones in the eastern part of the Ukraine, including the husband of a woman killed by a direct rock hit that slammed into their house in early February. March for Ukraine in Tel Aviv

Launched by pro-Russian separatists at the city of Donetsk, a rebel stronghold in eastern Ukraine, the rocket killed Irina Shelkayeba, a teacher, as she was cooking supper. More than 6,000 people have been killed in eastern Ukraine during the conflict.

Irina’s home was completely destroyed and the family was left with no property. Her niece, Liora Nissim who lives in Israel, assisted Irina’s family with the decision to make aliyah to the Jewish state and met Irina’s husband and family members in an emotional reunion at Ben Gurion Airport on Tuesday.

“I made Aliya myself 17 years ago as part of the Na’ale program, while my family remained in Donetsk in eastern Ukraine,” said Liora Nissim.

“My family lived next to the airport, an area in which the difficult battles were raging. This continued on and on and they waited all this time for it to finally end. It is hard to leave home, especially when war is raging outside,” she explained.

Liora said that she that heard that the International Fellowship of Christians and Jews (IFCJ) were organizing refugee flights and immediately contacted the organization.

Meanwhile, a Jewish soldier’s body removed from Ukraine battlefield under fire. Tali Farkash ZAKA volunteers succeed in getting Yevgeni Yatsina out of fighting zone and giving him a Jewish burial in Kiev nearly one month after he was killed in battle against Russian army. (Ynetnews)

FZS NEWS: First we wanted to give a praise report that another 40 ft. container of clothing and aid is now in route to us from GAIN in Holland and scheduled to arrive in Jerusalem around April 20. With the help of a generous donation from our friend JJ in Arizona, we we’re able to cover all shipping and customs costs… Thank you very much!

Another Philippine aid container is full and waiting for funding.

Many of the families we serve have just arrived in Israel as new immigrants and they are in need of just the basics necessities for starting life over in their new country. As you read in the story above, many are fleeing anti-Semitism and conflict as in Eastern Ukraine and other threatening areas around the world.

We are very aware of the privilege and responsibility of our calling at For Zion’s Sake Ministries. Which is to be fully supplied at our Jerusalem warehouse ministry center and ready to help the needy with the comfort of Yeshua’s love, while providing material blessings to the lost Sheep the Lord brings Home…

The geo-political reality is clearly showing us that now is the time to intensify our preparations in order to keep our distribution warehouse fully stocked with all of the supplies needed to help assist the millions of Jews that have still yet to come. Just as Joseph was able to fill the storehouses in Egypt in preparation for the 7 years of famine… With your help we will continue in this mission!

Will you stand with us in financial support in this unique time in History as we see the Bible being fulfilled before our eyes? God is bringing HIS people Home!

See, I will bring them from the land of the north and gather them from the ends of the earth. Among them will be the blind and the lame, expectant mothers and women in labor; a great throng will return. (Jer. 31:8)

Thank you for being a part of this biblical ingathering of the Jews!