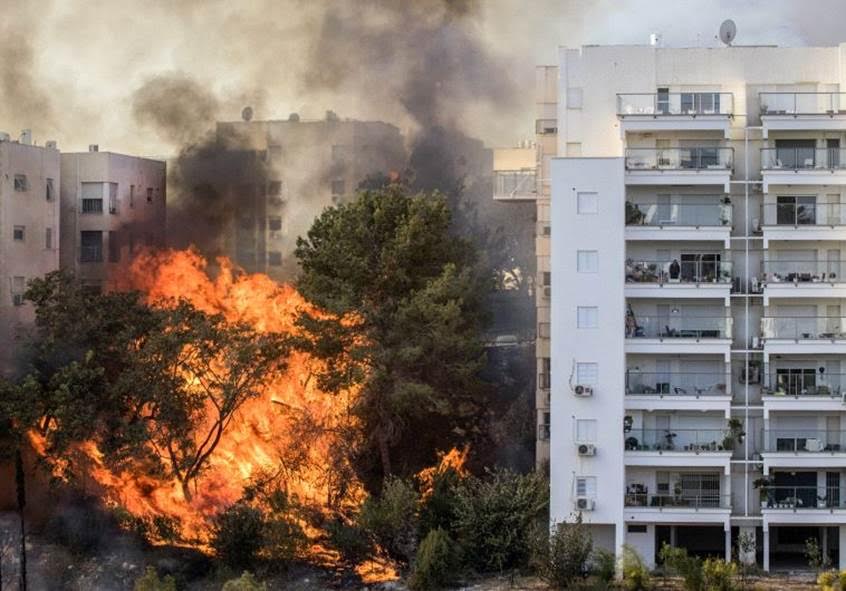 Oh, that Salvation of Israel would come out of Zion! When the Lord restores his people, let Jacob rejoice and Israel be glad. ( PS 14:7 ) Earlier this week, Israel’s fire brigade announced that the crisis of natural and arson fires across the country had finally come under control. It all began exactly a week before, as an extraordinary windstorm swept the country after a long dry season, causing 1,773 fires. Tens of thousands of policemen, firefighters, soldiers, paramedics and volunteers worked around the clock to control the damage. It is suspected that 25 out of 39 severe fires were started by arsonists, and dozens of suspects are now under investigation. Buildings on fire in Haifa

The cost to private citizens and the government will be huge, probably exceeding $1 billion. Additionally, over 5,000 acres of land were scorched including precious forests and nature reserves. It is estimated that restoration will require 30 years. On a positive note, a number of countries sent aid, including the Palestinian Authority! FZS is and will be involved in Humanitarian relief efforts, as well as monetary distributions for those families who were directly affected by the fire.

FZS is and will be involved in Humanitarian relief efforts as well as monetary distributions for those families who were directly affected by the fires including several Holocaust survivors whose homes were destroyed.

We agree with the Prime Minister of Israel, Benjamin Netanyahu who said in the aftermath, “In the place of every tree that was blackened, another 10 green trees will bloom. That is what our predecessors did since the establishment of the Zionist enterprise, and that is what we will do as well: plant, build and deepen our roots.” FZS will be hosting another group of Holocaust Survivors next week from Dec. 5th-12

PLEASE PRAY! We will be hosting another group of Holocaust Survivors at Haus Schönegg from December 5-12, 2016 and we are trusting the Lord to open many doors for them to share their testimonies of survival in both schools and churches. This time we have a group of 5 coming to visit. Please pray that our fellowship together would be blessed and for many opportunities to share our faith with them as well.

Last week we also had the privilege to visit Port Loko, Sierra Leone Africa to inspect the site for the Ebola Children’s’ Orphanage FZS is helping to build and participate in food distribution to needy communities.

Here is a link to hear Alphajor, our man on the ground there, explain the vision for the center… This in from Jason…

A sincere thank you again to the many of you who shared in the amazing outreach to Beslan. I sit here, like, still amazed at what He did in that hurting and healing community.

Please pray for me, friends, as I’m now back in Pittsburgh and working on my schedule here for work (English tutoring), as well as for ministry in music, refugee assistance, and ongoing Beslan outreach. Thank you so very much!

And lastly, pray for your brothers and sister in Christ in Beslan and elsewhere in Russia. Remember that, before being citizens of any earthly country, we believers are first and foremost citizens of Heaven. And please enjoy these two worship songs sung in Russian (and in a little Hebrew) – they are so very beautiful. Oh for the day when we are all before His throne, singing and praising our Great God! Until that time, brothers and sisters, we work. We work so that there may be even more people singing before that Great God. Don’t be distracted by this world’s bells and whistles – all that matters is Christ and people.

Thank you for your faithful support to FZS Ministries!