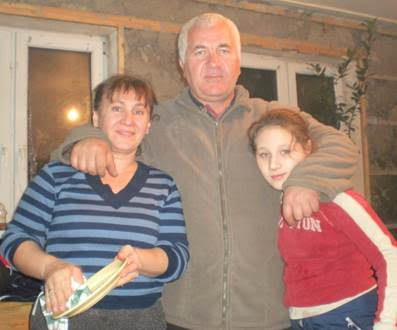 The Lord giveth and the Lord taketh away,
Blessed be the name of the Lord. (Job 1:21)

It has been said, “lighting doesn’t strike the same place twice”, however in the case of Irina Dzhoyeva, from Beslan, Russia it has indeed. Ira herself, a strong believer in Jesus, was one of the hostages held in the 2004 Beslan school terrorist attack, along with her two oldest sons.

FZS went there just days later to offer comfort and relief to those who were suffering. It was then we first meet Irina and her family… She and the second son survived, but tragically, the oldest son did not and was burned in the gymnasium that fateful day along with over 167 other children. Irina, Akhshar and their daughter before the fire

And now, just this week we were informed that Ira’s house burned down and sadly her husband Akhshar died due to the flames. The fire happened at night, and all of the family was able to flee, but the father’s head and back caught on fire as he tried to save the others. He died the following day in the hospital. When a backslidden neighbor, who had stopped going to church services saw the tragedy, he lifted his hands in the air and said, “Lord, forgive me!”

Please, pray for Irina and her four children, aged 26 to 14 as they try and pick up the pieces once again to rebuild their lives. FZS is sending a special offering for the rebuilding of their house.

If you would like to give a special love gift directly to Irina, contact Bradley at [email protected] We also had to say goodbye to our dear brother Dima Freedman who passed away last week from cancer. Dima was a part of our congregation for many years and we will miss his smiling face greatly! We had a very touching memorial service for Dima last Shabbat as we shared together many tears and memories with Dima’s mother and sister who live in Haifa.

The Emergency Situation in Myanmar is Critical This report from Pastor Elisha whom FZS supports…

The situation of Myanmar is becoming worse day by day. The people are struggling for their daily food. Starvation, injustice and oppression fill the whole country. The people really need food supplies.

The brutal military junta have mistreated and killed more than 700 peaceful protesters. They have robed many houses, taken away their precious possessions and destroyed several stores. They have arrested several good leaders and CDM but released several criminals. They have manipulated gang leaders to side with them. They could persuade the worst group of gangs in our local area. The protectors become the robbers. At any time, they can accuse, rob, kill and persecute the armless people like us.

Humanly speaking, like the 12 spies of Moses, we are in a very dangerous situation because we are the tribal Christians who are reaching Buddhist people with the Gospel of Christ. But from the Divine point of view, like Joshua and Caleb, we are not left alone to fight the battle on our own. God is with us and He is greater than our problem. Without His permission, even a single sparrow never falls to the ground. We are in His mighty Hand. He is our refuge.

We praise God for His protection and guidance throughout this hour. It is always good to know that you are standing with us with your prayers and financial support. Your encouragement in the Word is so precious and always meaningful to us.

As we open up our heart in seeking Divine guidance for how to approach our day to day ministry, we continue to move as the Lord leads. That’s why we made a decision not to flee but to stand strong for the people in ministry. We joyfully serve the people. We are always amazed by God’s wonderful work in our lives. Morning by morning we see His new mercy. We had to send some children back because their parents and relatives were so worried for them.

Please continue to pray for us that each and every one might work faithfully as the Lord leads.

For special offerings for our brothers and sisters in Myanmar, please contact Bradley at [email protected]

Miss Anna will be 15 in June. Isn’t that amazing?

She is in SF right now for her cancer followup testing. She is approaching 5 years cancer free. She is still in the wheelchair and her surgeon says there will be a day of reckoning down the road from the severe contraction of her foot. If nothing is done, the contracture will eventually break her ankle. They could put her in a brace and use botox injections, but nobody is optimistic about using a brace on skin that marks instantly and turns into a wound in a short amount of time.

The last option is an amputation around her knee. Again, the skin that won’t heal is of great concern… a prosthetic would actually make her more mobile but, again, nobody knows if her skin could handle the pressure. She did not take the loss of her hair during treatment very well (she did everything WELL except that) and we don’t think that she will handle the disfigurement of an amputation very well either.

She just graduated from the 8th grade and we were thrilled to discover she can read and do math at a 3rd grade level (it once appeared she was cognitively unable to learn, so this is huge).

As I’m sure you’ve noticed, America’s in dire straits… although the entire world is suffering as Satan rages as his time is running out. The Lord remains gracious to us and we are doing well financially and are rock solid in our faith.

We think of you and the wonderful work you are doing. Here are some recent distribution photos of Olim receiving clothing… Thank you very much for your faithful prayers and support to For Zion’s Sake Ministry!