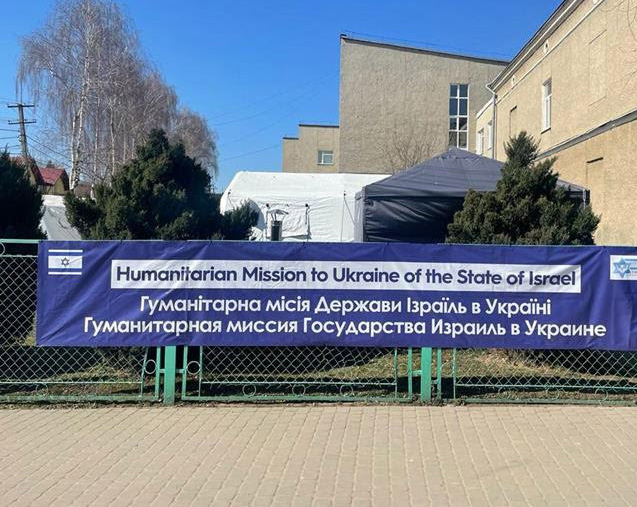 Meeting Desperate Refugees at the Borders of Ukraine

“Give me your tired, your poor;
your huddled masses yearning to breathe free…”
(Statue of Liberty, USA)

It’s been an amazing outreach and labor of love working with the Ukrainian refugees from the borders of Hungary, Poland, and Ukraine, and then following them as they begin a new life in Israel, where we also met with some of them.

However, the highlight of my time in eastern Europe was volunteering with the Israeli Field Hospital near Lviv, Ukraine. During six weeks of operation, the hospital’s 100 staff members – 80 of whom were doctors and nurses treated more than 6,000 patients. For Zion’s Sake has worked with the Israeli Field Hospital in the Philippines, Nepal, and now for the third time in Ukraine. What a privilege for FZS to be a part of this heroic mission from Israel!

The line gathered at the hospital very morning Ukrainian Refugee Outreach at the Hungarian and Polish Borders

We were so blessed to assist some of the refugees and help lead them through the different stages of their journey to Israel. Of course our goal is not only to help them with their practical needs, but also encourage them with the spiritual assurance that the Lord is with them and He will always be there to help in their time of need. While the refugees waited for hours in the cold, we were able to share comfort with a hot drink and a warm meal. It is especially traumatizing for the wives and mothers, because Ukrainian men between the ages of 18 to 60 are not permitted to leave Ukraine. This means that many families are separated for the time being…

Refugees at the border Crowds of refugees waiting for shelter at the Polish border

There were several individuals who we became very close with, and we remain in contact with until now – both in Israel and Europe. Please keep them and the many hundreds of thousands of refugees in your prayers as they begin their new lives in Israel and around the world!

Visiting Arik, a Holocaust Survivor at a Hungarian Shelter and later in Israel

Arik, an 82-year-old Holocaust Survivor we met at the Hungarian border, now lives in a senior home in Petach Tikvah. It was obvious that he needed special attention due to his physical disabilities. He is partially paralyzed and is not able to move or carry things on his own. At the beginning of WWII, Arik fled with his mother from the Nazi German invasion on a freight train heading east. While the train was hit by a bomb and caught on fire, the passengers started jumping off the train while it was moving.

His mother also jumped with Arik, but unfortunately, his back was broken when he fell on the ground. He has suffered his whole life due to that injury and is physically challenged. Arik came to know the Lord through a Jewish couple when he was 50. With God’s help, this 82-year-old man is now in Israel, receiving care in a senior home. We will continue to visit and encourage Arik as time allows. Please pray that he can find fellowship where he lives in Petach Tikvah.

From Ukraine to Israel

We met Katya and her baby Stas, who is just under two years old, at the Ukrainian-Hungarian border in Barabash. Katya is the 5,000th Ukrainian immigrant to Israel! We met her several times in Jerusalem while she was staying at a hotel which was provided by the state for her first month’s stay. She is very happy and has already made a lot of friends, some of whom are even able to help look after her son when she has to go to various offices to process their documents. Of course, she misses her family who stayed in Ukraine, but she is a fighter and is moving forward with confidence. Since she has a doctor’s status, she will soon begin taking special Hebrew courses for medical staff. She is staying with a woman she met in Israel, near Jerusalem. Please pray for Katya’s family reunion and her Hebrew studies!

Visiting Tanya and her daughters at a Hungarian Shelter, later in Israel

We met Tanya and her two daughters also in Barabash at the Ukrainian-Hungarian border. Tanya’s husband and son remained in Ukraine and she was at a complete loss at that time. We visited her several times while she was staying at a hotel in Jerusalem. The day before her move, we were able to bring her bedding, toiletries, and writing materials for the girls. The older girl, a big helper (9 years old), was also happy to babysit Katya’s Stas. As we said goodbye, we gave Tanya a Russian Bible. In Israel, children start studying the Torah in Hebrew in first grade and it isn’t easy for them. I explained Tanya that the Russian translation would help her study with her daughter and learn the Word of God, which will never return to Him void. Please pray that Tanya will come to know the Lord and that she will see His hand in the Promised Land!

Coming to the Promised Land

While we were in Hungary, we got a call from the coordinator from the Ukrainian Ebenezer branch to meet a woman with her son at the border, and so we met Tatyana and Sasha for the first time. We learned that her husband was not allowed to leave Ukraine at that time, even though he had cancer and is not able to join the army. We prayed for the whole family and month later, they were all reunited – PTL! Tanya is a believer and the whole family was able to celebrate their first Passover in a synagogue in Budapest. She described it as a great miracle and a blessing for them! They are still in Budapest where the Jewish organization “Sochnut” graciously provided them with a hotel room while they gather all the necessary documents to obtain Israeli citizenship. They succeeded in everything and are only waiting for their flight. Tatyana, her husband Zhenya, and their son Sasha wish to live in Bat Yam and can’t wait to arrive in the Promised Land. Please pray for their new life as they start over in the long-awaited Promised Land, as well as Zhenya’s health.

We met Cindy and her daughters, Paulina and Vika, at the Absorption Center near the Polish Border. She looked frightened and confused so we asked her if she needed help. She started crying and said she had no idea what to do and where to go. After sharing the Lord with her and praying, we invited her to stay with a Christian family in Holland where she was gladly accepted. She is now settling well in Holland and her girls are about to begin school there. Please pray for Cindy as she is hoping to be reunited with her husband soon. Visiting with Natasha in Jerusalem and sharing the Word

“Don’t Cry, Pull Yourself Together”

Natasha always smilingly reminds me of my words, “Don’t cry, pull yourself together…” At the time, Natasha was in tears and despair as she was about to have an abortion. Now she is 28 weeks pregnant. She is working as a housecleaner, which is becoming difficult because it is hard for her to move around as much. Natasha was very touched by our prayer for her, and said that the boys even started kicking in her belly. We gave her a Bible and advised her where to start reading. Earlier on, she complained about her fate, but when we said goodbye to her, she said she was as happy as she had ever been. Since Natasha is expecting twins, she is looking for a bigger apartment. She is in great need of financial assistance and FZS would like to help her. If any of you would like to support Natasha, it would be a great blessing. Please pray for her faith, strength, an easy pregnancy and successful birth of her twins! 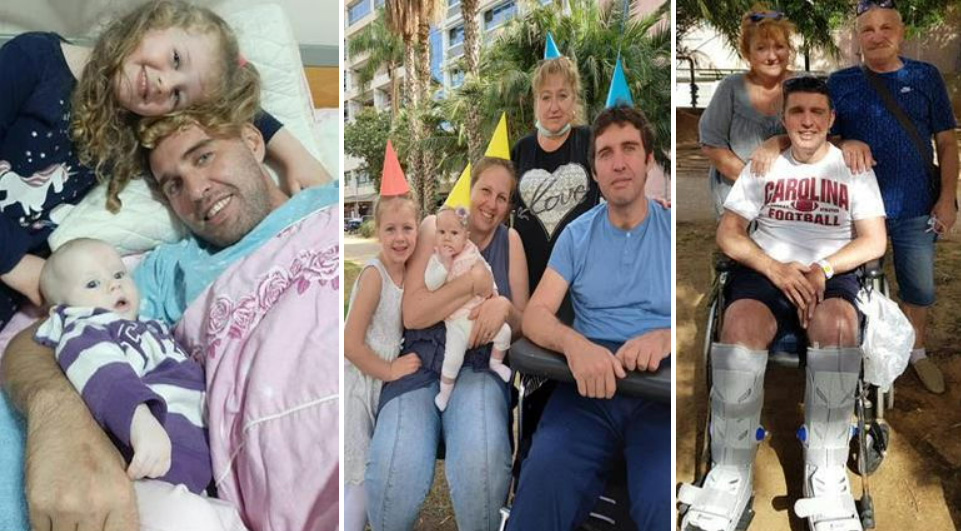 Visiting with Victor and his family in Raanana, Israel

Victor had recently undergone surgery on his legs. His feet were twisted inward and he could not stand, so a surgical intervention was necessary. We visited him at the rehabilitation center in Raanana where we also met his mother and stepfather – both very devoted and loving people. Victor is now trying to get on his feet and take a few steps. Later on he is going to have another operation on his right arm which he cannot bend. FZS helps him and his family financially on a monthly basis. Please pray for the restoration of Victor’s health and hope in our faithful Savior. This year the Holocaust Martyrs’ and Heroes’ Remembrance Day started on the evening of April 27th. The Jerusalem Holocaust Survivors’ Association invited us along with students from The Hebrew University of Jerusalem to join them on this day of commemoration. President Lilian Glazer and vice-president Alexander Vishnevetsky were sharing their testimonies with all of us. We were very pleased to see the children and grandchildren who also came to honor the members of the association and remember those who perished in the concentration camps and ghettos.

After a long time of a lockdown restrictions, we could all meet again in freedom and warm fellowship!

Visits with Tanya and Asya

(L) Tanya became a dear friend to our family. She is a Holocaust survivor who witnessed her mother and brother being killed in front of her eyes. Tanya loves the Lord and faithfully prays for every individual on her long list of names every day. She blesses everyone she meets, calls us and speaks blessings over the phone. Tanya never forgets any of our family’s birthdays. She is very optimistic and energetic, and charges everyone around her with her positivity. We love her dearly and pray for her well-being!

(R) Our dear Asya (92 y.o.) has been living with her niece in the Golan Heights for almost a year now. You may recall that she is a Holocaust Survivor, and spent her childhood in an orphanage after her parents were killed by the Nazis during the war. Asya loves the Lord Yeshua and prays faithfully daily. We call her daughter of Zion. She has severe arthritis and is bothered by strong pain. Please pray that the Lord might ease her pain, in His mercy!

I know that this is quite a busy newsletter, but in fact, there are so many more stories and pictures we could include of the many, many people we have met and have had contact with these past couple of months. All this to say, thank you so very much for partnering with us and helping provide us the means to be able to reach out in Yeshua’s love and care to the least of these His brethren!