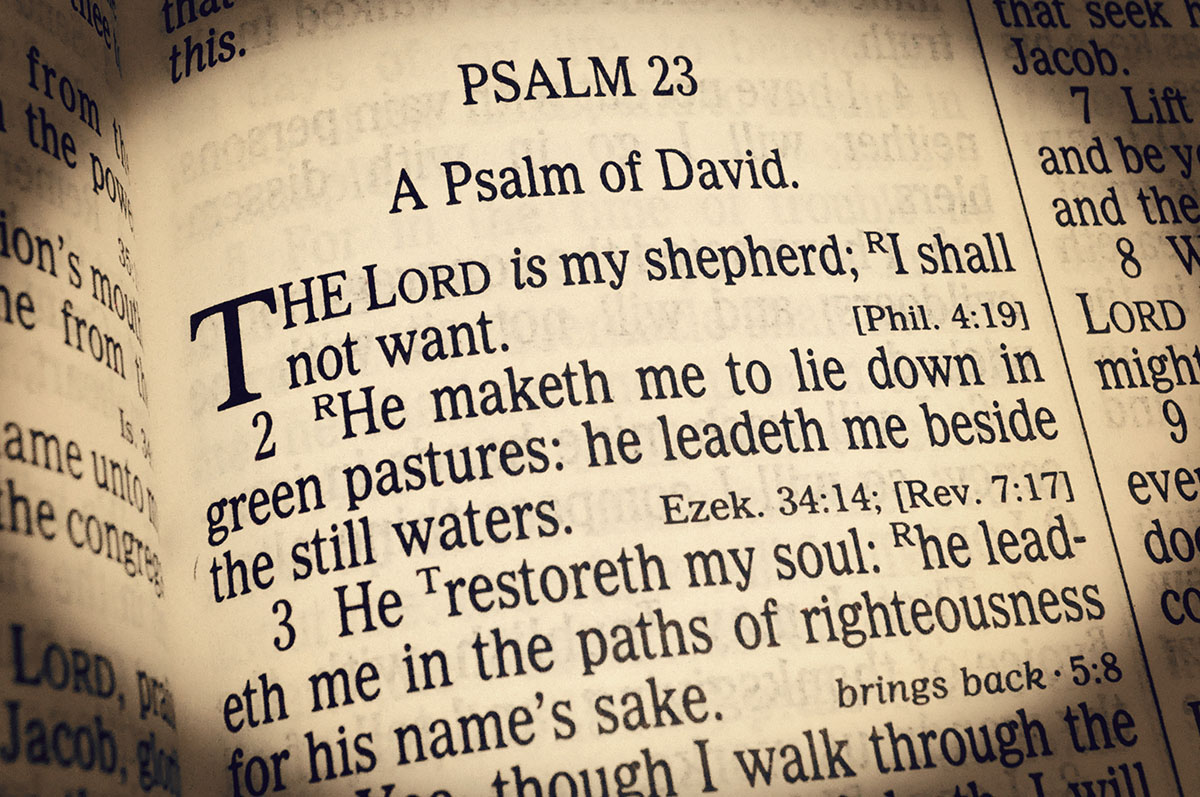 The Lord is my shepherd…

When Yeshua declared in John chapter 10 vs.11 that, “I am the good shepherd”. The good shepherd gives His life for the sheep… It is important to note, that here He is declaring openly to Israel that He himself is both The LORD and King Messiah, the Son of David! For just as the LORD chose David from tending a sheepfold to lead Israel as King, so too the Messiah and the Son of David was also chosen as the Good shepherd to give His life for Israel as foretold by the prophets.

‘Therefore thus says the Lord God to them: “Behold, I Myself will judge between the fat and the lean sheep. Because you have pushed with side and shoulder, butted all the weak ones with your horns, and scattered them abroad, therefore I will save My flock, and they shall no longer be a prey; and I will judge between sheep and sheep. I will establish one shepherd over them, and he shall feed them – My servant David. He shall feed them and be their shepherd. 24 And I, the Lord, will be their God, and My servant David a prince among them; I, the Lord, have spoken. (Ezekiel 34:20-24)

Also in Ezekiel 37:24-28 we read of this Messiah-King-Shepherd role, “David My servant shall be king over them, and they shall all have one shepherd; (Of course David was already dead, so the prophet was speaking of his future Son) they shall also walk in My judgments and observe My statutes, and do them. Then they shall dwell in the land that I have given to Jacob My servant, where your fathers dwelt; and they shall dwell there, they, their children, and their children’s children, forever; and My servant (the Son of) David shall be their prince forever.

Moreover I will make a covenant of peace with them, and it shall be an everlasting covenant with them; I will establish them and multiply them, and I will set My sanctuary in their midst forevermore. My tabernacle also shall be with them; indeed I will be their God, and they shall be My people. 28 The nations also will know that I, the Lord, sanctify Israel, when My sanctuary is in their midst forevermore.” There are other passages that speak of the people turning to and serving the son of David, King Messiah: I find it ironic that Yeshua chose not to declare his identity with his own words such as, “I AM THE SON OF DAVID, THE ETERNAL KING MESSIAH”!!! Rather, he chose to declare those prophetic scriptures which had already revealed his identity to Israel, thus truly fulfilling the Word of God.

“Instead, they will serve the LORD their God and (the Son of) David their King, whom I will raise up for them ” (Jeremiah 30:9)

One possible meaning of the words “raise up” is that God in the latter days will physically resurrect the Son of David, Yeshua in order to rule over Israel FOREVER! For the children of Israel shall abide many days without king or prince, without sacrifice or sacred pillar, without ephod or teraphim. 5 Afterward the children of Israel shall return and seek the Lord their God and ( the Son of ) David their king. They shall fear the Lord and His goodness in the latter days. (Hosea 3:4-5)

I am the good shepherd; and I know My sheep, and am known by My own. As the Father knows Me, even so I know the Father; and I lay down My life for the sheep. And other sheep I have which are not of this fold; them also I must bring, and they will hear My voice; and there will be one flock and one shepherd.

“When the Son of Man comes in His glory, and all the holy angels with Him, then He will sit on the throne of His glory. All the nations will be gathered before Him, and He will separate them one from another, as a shepherd divides his sheep from the goats. (Mt 25:31-33)

Is the Lord, King Messiah, Son of David, Yeshua truly your Shepherd?

A Visit with the Fogal Kids

We thank the Lord for the opportunity to visit with the family of Ruth Fogel in their modest apartment in Jerusalem and deliver the funds that we collected from our supporters for the remaining orphaned Fogel children. You may recall that on March 11, 2011, Udi, 36-years old, his wife Ruth, 35-years old, and their children Yoav, 11-years old, Elad, 4-years old and Hadas, 3 months were all stabbed to death in their home after celebrating the Sabbath.

3 additional children who survived the attack are Tamar, 14-years old, Roi, 8-years old and Yishai, 2-years old are now live with their grandparents in Jerusalem.

We were welcomed by Ruth’s brother as we were introduced in the living room of their modest apartment, the atmosphere was that of an orthodox Jewish family. There was the father, the mother, a sister of Ruth Fogel with her husband and four children. Roi was playing with his cousins. The youngest, Yishia was already sleeping, and the older daughter Tamar (14 years old) made a brief gesture to say, Thank you. she is apparently still under shock, keeping her head down.

The grandmother of the children remained silent as we sat on a sofa… We introduced ourselves and Victor began the conversation in French as they are originally from France. Victor also translated in English for Rob and Asha. The grandfather kindly welcomed us, and very peacefully he said: we appreciate very much your visit, it gives us hope and warmth to have visits like this, and to receive from all over the world signs of compassion, we have the feeling to be part of a great family. We will keep on the way our children took, there are more and more of our people in Israel considering that we are fulfilling the prophecies of the Bible living here. The Presence of God is already here, but the coming of people from foreign lands with the same vision reinforces God’s Presence.

Rob gave to the grandfather an envelope containing the finances collected and some letters written by children in the US. We also gave to each one of the 3 orphans a bag filled up with different gifts. We blessed them, and the grandfather accompanied us to the entrance door. We felt that we could not speak and stay more, nor was it appropriate to take pictures in such a heavy atmosphere of grieving, We did not find any spirit of hatred nor a word or revenge among them. (As told by Victor Escroignard of FZS).

Tamar Fogal, from the mouth of babes…

Last week Victor, Asha and Luda visited the Kravchenko family who are all living together in one tiny apartment. The grandparents, Alexander and Tatiana, their daughter, Viktoria and her husband, Vyacheslav and their daughters Valeria (14) and Polina (5). The family immigrated from Karkow, Ukraine just 4 months ago. They are all Ukrainian Jews and said they always felt different and that they did not belong in Ukraine because their family still bears the scars of anti-Semitism. Their great-aunt was one of the 33,000 Ukrainian Jews that were brutally murdered and dumped into a large pit, during in the famous Babi Yar massacre by the Nazi’s who occupied Ukraine…

All the Kravchenko family members now attend Hebrew classes in an Ulpan, which will end soon. Then they’ll have to face the reality of Israeli life but they are very optimistic and ready to try. The Grandparents are retired and receive a small pension from Israel, Viktoria was an English teacher for children, her husband is a welder and shouldn’t have trouble finding a job. The elder daughter is in a special class of intensive Hebrew, the younger one is in the last year of kindergarten. Viktoria wants to learn more about Israel and the Jewish history and culture, she’s eager to learn Hebrew and to integrate as fast as she can. They trust God and we got the chance to bless them with Hebrew/Russian bibles…

Gabriella (27) came to Israel with her husband and their adopted son Michael (11) in October 2010. Shortly after arriving in Israel the couple were divorced and Gabriella raises Michael on her own as her ex-husband doesn’t want anything to do with her or Michael. Now being a single mother, she had to rent the cheapest room she could find a basement with no furniture.

Gabriella holds 2 jobs and studies Hebrew in an Ulpan. She also had to take a loan from the bank just to use it as a guaranty for the renting of her basement. So between holding 2 jobs, paying rent, the loan, and raising a child on her own, life is quite difficult for her, but she doesn’t complain and does everything to provide for her son. We provided her with a folding kitchen table and gave her new clothes from the shipment we received. So please pray for Gabriella and Michael as they start their new life here in Israel

There are so many needs and needy people in Israel and our heart is to help as many as we can with food, furniture, clothing and whatever else the Lord puts in our hands to distribute. Thank you for your faithful finical support to For Zion’s Sake, that allows us to continue to give generously to the needy amongst God’s chosen people in Yeshua’s name!

It pleased them indeed, and they are their debtors. For if the Gentiles have been partakers of their spiritual things, their duty is also to minister to them in material things. (Ro 15:27-28)