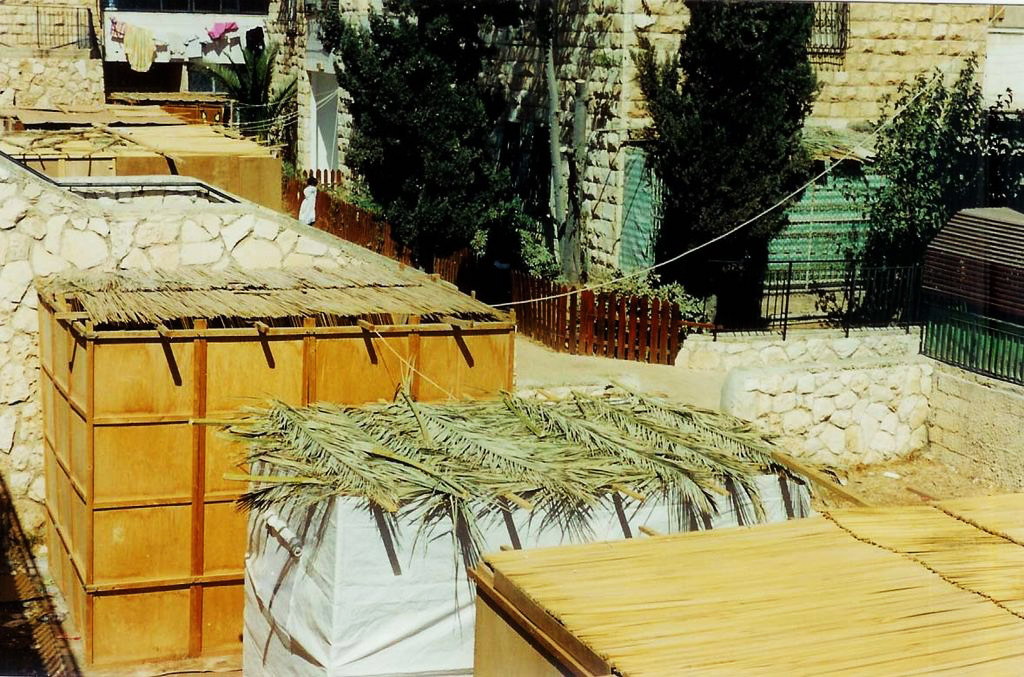 Dear brothers & sisters…
Once again, Sukkot or the Feast of Tabernacles is upon us here in Jerusalem. Sukkot is a joyous holiday which commemorates the Exodus of the Jewish people from Egypt and God’s complete provision for us in the wilderness. Our fathers wandered in the desert for 40 years before reaching the Land of Israel and during this time we lived in small tents called a “sukkah“. As described in the Torah, we are commanded to hold a week-long festival and also build sukkahs and live in them.

The Cohanim, believed to be descendants of the Priests who served God in the Jewish Temple before it was destroyed, each year perform an ancient blessing ceremony over the Jewish people during Sukkot. Every Jewish male was required by God to appear before Him in Jerusalem as it is written…

Another custom of Sukkot is the Water Libation Ceremony, and a time of prayer for rain in Israel. During the second Temple period a Priest would take a water pitcher down to the pool of Shiloach (today called Siloam in the city of David) and he would bring it back to the Temple. Crowds of people would follow him dancing and singing “The Hellel”, (Psalms 113-118) The highlight of this ceremony was when the High Priest would pour out this water onto the altar of the Temple. It became known as “Simcha Bet-Ha-sho-evah” (The rejoicing of the House of Drawing Water).

Now we can appreciate the Scripture that was recorded on the day Yeshua was teaching in Jerusalem on Sukkot.

“In the last day, that great day of the feast, Yeshua stood and cried, saying, “If any man thirst, let him come unto me, and drink. He that believeth on me, as the scripture hath said, out of his belly shall flow rivers of living water. But this spoke he of the Spirit, which they that believe on him should receive: for the Holy Spirit was not yet given: because Yeshua was not yet glorified.”( John 7:37-39 )

“Therefore with joy shall you draw water out of the wells of Salvation” ( Is. 12:3 )

Salvation in Hebrew is Yeshua, the name of the Messiah

And it shall come to pass, [that] every one that is left of all the nations which came against Jerusalem shall even go up from year to year to worship the King, the LORD of hosts, and to keep the feast of tabernacles. ( Zech 14:16 )

After surviving the busy week of excitement we shared with the 8 wounded soldiers, we next hosted a smaller group of Holocaust survivors here at the Schönegg. We thought the pace of this group would have been much slower because of their age ( Hanna being the oldest at 89) however to our surprise this was not the case at all! The survivors were quite eager to experience as much as possible and except for occasional rest stops during the day, we went full steam ahead with touring, sightseeing and meetings with many believers in Switzerland.

This group of the last living witnesses of the Holocaust included survivors from Hungary, Poland and the Former Soviet Union. Whether having escaped the Ghettos or Concentration Camps such as Auschwitz-Birkenau, we found these special treasures to be bacons of light and hope to those who had the pleasure of meeting them.

Some memorable quotes come to mind that stand out from the many conversations we shared together that week. When I asked Sergei, one of the leaders of the Holocaust survivors association in Israel how often he thinks about what happened over 65 years ago, he responded, “every day of my life I live with the pain as if I am still there.” He went on to say that he feels guilty that he survived, when so many others perished. “Why was I chosen to live”he added? Looking back, I personally did not sense from any of the survivors that visited us any resentment towards God or bitterness as to why He (God) might allow such a terrible thing to happen for seven long years.

On behalf of our family- I would like to say, “thank you” for the privilege of being able to spend an unforgettable week with such extraordinary people. These chosen ones, who were plucked from the fire of death, have survived to pass along their treasures of wisdom with all of us… It is strongly in our hearts to continue to honor and bless these last living Survivors as long as they remain with us! We are already looking forward to our next group of Wounded Soldiers and Holocaust survivors this winter, God willing.

THESE CHILDREN DID NOT SURVIVE

The number of children killed by Hitler and his Nazis is not fathomable and full statistics for the tragic fate of the children will never be known. Estimates range as high as 1.5 million murdered children during the Holocaust. This figure includes more than 1.2 million Jewish children, tens of thousands of Gypsy children and thousands of institutionalized handicapped children.

Plucked from their homes and stripped of their childhoods, the children had witnessed the murder of parents, siblings, and relatives. They faced starvation, illness and brutal labor, until they were consigned to the gas chambers.

This is the story of the children of Izieu – but there are no happy endings. In 1944 the Nazis from Lyon sent three vehicles to the tiny French village to exterminate the children of the orphanage known as La Maison d’Izieu. Here 44 Jewish children in age from 3 to 18 were hidden away from the Nazi terror that surrounded them.

On the morning of April 6, 1944, as the children all settled down in the refectory to drink hot chocolate, the Nazis led by the Butcher of Lyon Klaus Barbie, raided the Home, throwing the crying and terrified children on to the trucks like sacks of potatoes.

The Jewish Children Of Izieu

The little children were deported to the Nazi death camp Auschwitz and murdered immediately upon arrival. Of the forty-four children kidnapped by the Nazis in Izieu, not a single one survived. Of the supervisors there was one sole survivor, twenty-seven year old Lea Feldblum.

Beate and Serge Klarsfeld, who brought Klaus Barbie to justice in 1983, later wrote: “Forty-four children deported – no mere statistic, but rather forty-four tragedies which continue to cause us pain …”

Eleven-year-old Liliane Gerenstein, born January 13, 1933 in Nice, France, wrote a heart-rending letter to God just days before the children of Izieu were sent to their deaths at Auschwitz:

“God? How good You are, how kind and if one had to count the number of goodnesses and kindnesses You have done, one would never finish.

God? It is thanks to You that I had a beautiful life before, that I was spoiled, that I had lovely things that others do not have.

God? After that, I ask You one thing only: Make my parents come back, my poor parents protect them (even more than You protect me) so that I can see them again as soon as possible.

Make them come back again. Ah! I had such a good mother and such a good father! I have such faith in You and I thank You in advance.”

With Love and blessings from all of us! Bradley Antolovich and staff